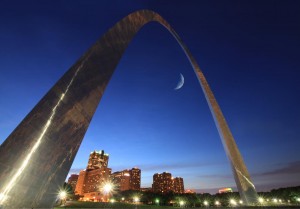 Located on the border of the state of Missouri, St Louis is the second largest city in the state today with a population of over 300,000 today. Part of the Greater St. Louis metro area, it is home to a larger metro population of over 2.8 million and hosts millions of visitors each year. Home to a number of major corporations, professional sports teams and many popular tourist destinations, St Louis is one of the most well known areas within the state.

Founded in 1764, the area was settled long before the arrival of European settlers. Home to a large Native American population, many of the regions popular attractions and sites of historical importance offer a look at this culture including those for which the city got its nickname, its mounds.

Host of the Worlds Fair in early 1900’s, tourism has always been a large part of the success of this city and today thanks in part to that first massive tourism draw, the city has continued to grow and offer other amazing destinations for travel including Forest Park, the St. Louis Zoo, the Missouri History Museum, the Art Museum and the world famous arch. Of all the popular destinations however, one is by far the most recognizable.

Recognized as the tallest monument in the nation at 630 feet tall, the Gateway Arch has been hosting millions of visitors for over 40 years. Built to commemorated Thomas Jefferson and St Louis role in the westward expansion of the U.S., this massive structure is more than just fun to look at. Tourists have the opportunity to journey to the top. The Journey to the Top lets you see for up to 30 miles on clear day. Look west and you will see wonderful views of St. Louis while a look to the east, you will be able to see the Mississippi river and the state of Illinois.

Also while visiting the arch take advantage of the other sights and attractions as well including the Museum of Westward Expansion and the Movies at the Arch.

You can learn more about the arch at its website stlouisarch.com.