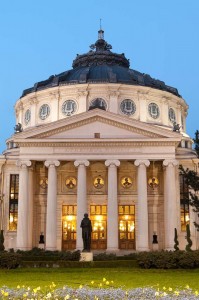 Bucharest is the capital municipality, cultural, industrial, and financial center of Romania. It is the largest city in Romania, located in the southeast of the country. Bucharest has a growing cultural scene with no defined style, and instead incorporates elements of Romanian and international culture. It has tree lined boulevards and has a Parisian flavor with elegant architecture and sophistication.  It has been nicknamed Little Paris.

Its architecture is a mix of Neo-Classical, Bauhaus and Art Deco. Although buildings and districts were damaged or destroyed by war, earthquakes, and Nicolai Ceausescu’s program of systematization, many have survived. Perhaps the most prominent newer construction is the Palace of the Parliament.  It was built in the 1980s during the reign of Communist dictator Nicolai Ceausescu.   It is the largest building in Europe and the second-largest in the world.  It is home of the Palace houses and the Romanian Parliament, as well as the National Museum of Contemporary Art. The building has one of the largest convention centers in the world. The Triumphal Arch was built in 1935 and was modeled after the Arc de Triomphe in Paris. A newer landmark is the abstract Memorial of Rebirth, a marble pillar unveiled in 2005 to honor the victims of the Romanian Revolution of 1989, which toppled Communism.

The city has museums that feature both classical and contemporary Romanian art, as well as international works. The National Museum of Art of Romania is located in the royal palace and features collections of medieval and modern Romanian art. The National Museum of Contemporary Art (MNAC) is located in a wing of the Palace of the Parliament, and was opened in 2004.  Its collection contains representations of Romanian and international contemporary art. The Village Museum is an open air museum that contains 272 authentic buildings and peasant farms from all over Romania. The Museum of the Romanian Peasant was declared the European Museum of the Year in 1996, and displays textiles, icons, ceramics, and other objects of Romanian peasant life.

There are a number of cultural festivals in Bucharest that take place in the summer months. The National Opera organizes the International Opera Festival every year in May and June, which includes ensembles and orchestras from all over the world. The Romanian Athenaeum Society hosts the George Enesco Festival throughout the city in September every two years.

Whether exploring in the U.S. or abroad, Tradewinds Vacations is here to help you. Explore culture and beauty around the world with us.