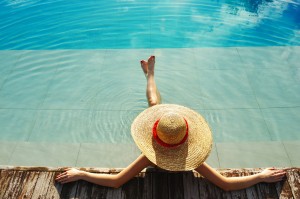 Antibes is a resort town in the Alpes-Maritimes department in southeastern France. It lies on the Mediterranean in the Côte d’Azur, located between Cannes and Nice. There are 48 beaches along the coastline that surround Antibes and Juan les Pins.  There is more to do then just laze away the day on the beach though in this breathtaking town.

In 1926, the old Château Grimaldi in Antibes was bought and later restored for use as a museum. Pablo Picasso came to the town in 1946 and was invited to stay here. During his six month stay Picasso painted and drew as well as crafting ceramics and tapestries.  Picasso left a number of his works to the municipality. The castle has since become the Picasso Museum. This museum houses one of the world’s ultimate Picasso collections it has 24 paintings, 44 drawings, 32 lithographs, 11 oils on paper, 80 pieces of ceramics, 2 sculptures and 5 tapestries.

The Archaeology Museum sits atop the Promenade Amiral de Grasse in the old Bastion St Andre, which is a 17th century fortress. The collection concentrates on the classical history of Antibes. Many artifacts, sculptures where found in local digs and shipwrecks from the harbor. The panoramic views of the sea and mountains from the promenade are remarkable.

The Naval Museum of Napoleon is housed in a 17th century stone fort and tower, this museum presents a collection of Napoleonic memorabilia. Numerous wall paintings show historic moments in Napoleon’s reign. The Absinthe Museum is located in a basement of the Roman foundations of Old Antibes. It is dedicated to the manufacture and appreciation of this green liqueur which is banned throughout most of the world. The Garoupe Lighthouse offers one of the best views in the region from its hilltop. To get here, you must walk about a half a mile up the Chemin de Calvaire from the Plage de la Salis.

The Church of the Immaculate Conception is the central church in Antibes and was first built in the 11th century with stones used from earlier Roman structures scattered around the city. The façade was constructed in the 18th century and blends classical Latin symmetry and religious fantasy. The interior houses extraordinary pieces such as a Baroque altarpiece and life-sized wooden carving of Christ’s death from 1447.

Looking for a place to stay in the area, you must try the Hotel du Cap-Eden Roc. This villa is set in a forest at the tip of the Cap d’Antibes peninsula.  It is a recreated 19th century château.   This has been one of the most glamorous and luxurious resorts in the French Riviera since 1870.